My ambition as a child was simply limited to wanting to be ‘great’. At some point, the specifics included Veterinary Medicine which was only my passion because it had a literal pot of gold attached to it. Further study (read Masters in Veterinary Surgery) fine-tuned what (if any) greatness I may achieve (yes! Still, its ‘greatness-in-waiting’) to this highly misunderstood art and craft which has very little to do with cutting and sewing, by the way.

It would be nice to be able to say I had lofty ideals like working hard to earn a PhD while trying to juggle a busy home life but that would be untrue. I am one of those women who love work and if there’s any to be done, all else fades from my consciousness. I am also lazy. That sounds like a contradiction, right? But I have said this so often and believe it totally as I have seen it play out in my life. I hate hassles and believe very firmly in delayed gratification and will thus do whatever is required of me so that I can be left well alone to…..well, daydream, which is my absolute favourite sport.

But this PhD asked for my life and a half.

While studying to get the PhD was not an accident, being an academic most certainly was. Nowadays, I am almost one when I get into class.

I had done a Masters circa 2004, had a baby who was all sugar and spice and I wanted something else to do and, I naively assumed a PhD was one of those things. The first distraction was another baby who was a lot of work, followed by some institutional opposition because of some long-held belief that surgeons are not bound by the same rules as anyone else (very pompous lot, we are!) And then I tried and tried and the research just wasn’t as stellar as I wanted.

I had (along with most other PhDs, I suspect) visions of my work holding the key to human existence in the new millennium with award after award falling at my dainty feet. So, imagine my surprise when even within my department, others thought I should have done better. It stung and with it, came the realisation (very sad indeed) that I may have a perfectionist tendency.

My supervisor (poor man) tried to reconcile me with the reality of the conduct of research, especially scientific research in Nigeria. It did not help that the concept I was investigating is a little known phenomenon. I held onto my hypotheses tenaciously. 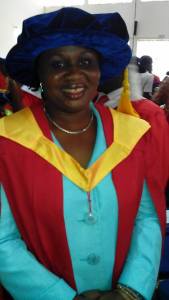 I had the support of wonderful people who seemingly would enter my life, play their role and exit. Almost none had a major role in my life at any point and the support I hoped to get from established quarters from where I should was non-existent. Being a worker at the same university I was attending, I was required to work on the PhD part-time and I really couldn’t have done more if I tried.

This PhD must rank as one of the most sought after if the opposing forces that were arrayed against it were anything to go by. From not having a supervisor, to getting one and forces attacking him (unsubstantiated but….) to unbelievable dreams and household wickedness of great magnitude, the road was fraught with very many dangers.

My work is mainly about some of the hitherto unexplored reasons for infertility; that a stomach incident that occurred because of lack of adequate blood supply to the gut could set up a series of events that could ultimately be responsible for derangements of almost every organ in the body and especially the germ cells which are the cells that mingle to form a new individual.

Being female, married with children had very little impact on my work in the sense that my family has very little idea about my work by choice. I leave work when I deal with the children and you really have to care before something can influence you in that way. 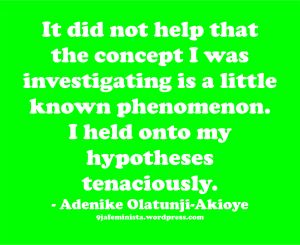 I had help that matched the troubles I experienced and it would be ingratitude to not mention my biggest cheerleader, my 87 year old ‘friend’. She gave money, and boy, did she harass me. Some days she was the only reason I did not pack it in. The thought of facing her to tell her I gave up was enough to stir me to try one more time. There was that person too, who told me a story of a Deanship election in my faculty and asked, ‘How badly do you want this?’ because, he said, that is what will determine what will happen, not any of the troubles you face.

And there is BFF, with whom I really ought to split this with but she has hers and a lot of other accomplishments by dint of hard work. She encouraged, coaxed, threatened and loved me till I got to the point I finally decided, ‘Ok, maybe no awards will come from this but at least, I will advance knowledge and cause people to look in this new direction’. And this really is what a PhD is about. Not the end of studying (as many are wont to think) but a new look at what has been and stirring up new vistas of study. Of this one fact, I am proud to say I did.