A four year old boy once said ‘I’m nakeding about the house’ when asked why he did not wear some clothes after he got back from school. He used the word ‘nakeding’ as one would say ‘jumping’ or ‘singing’, something along the lines of ‘I’m nakeding because I’m happy’. 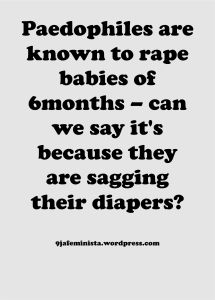 One of the pleasures I had while growing up, was that of going about naked in my house. During the usually, hellishly hot, dry season, I could be found playing around the neighbourhood in either a pair of shorts or an underpant, rainy season found me and my friends running around buck naked anytime the rain started. The most cloth I ever wore, while growing up, if I remember correctly, was an undergarment we fondly called a ‘shimmy’ and a pair of shorts. Except it was terribly cold, wearing of clothes was not a prerogative.

I remember being told by my grandmother that she never got to wear clothes until she was about sixteen years old, it was one of her neighbours that actually drew my great-grandmother’s attention to the fact that her daughter now had a pair of breasts and needed to cover them up.

I was at the swimming pool the other day with my children, and was pleased to see a young, flat chested girl, of about eight frolicking in the shallow end with her brothers, in only a pair of shorts, the same type her brothers were wearing.

Shame was not a word I associated with the happy little girl, but in the name of protecting our children, it appears we are teaching them how to be ashamed of their bodies.

A couple of weeks ago, in Kenya, a young lady was stripped naked by a mob of men, because her skirt was deemed too short. This led to a protest hashtagged #mydressmychoice, a simple call for the society to stop what Abimbola Adelakun, in her article titled “How to treat a Naked Woman”, called “legislating the sartorial choices of women.”

Although the stripping and protests took place in ‘faraway’ Kenya, stripping women naked for their choice of dressing, is nothing new to Nigeria.

In the old Yaba, before Raji Fashola brought some modicum of sanity to the place, the traders were known for booing and stripping girls they consider ‘skimpily’ or ‘outrageously’ dressed ,naked, in a lot of cases sexual harassment also takes place while these ‘judges of our morals’ are ‘punishing’ these women.

In a book titled “Nigerian Dress: The Body Honoured”, Dani Lyndersay traced the costume arts of traditional Nigerian dress from Early History to Independence… and I’m sad to say this to the puritans, our ancestors (from the North to the South), except for the very rich, went about stark naked! And I mean men, women and children. They adorned their bodies, beautifully, with tattoos and other things like feathers, cowry shells and even leaves, but the adornment was simply that, not a means of ‘covering up’.

I dare say wearing clothes and shoes, became popular in Nigeria, more of a statement of fashion, of how rich you are, than to cover up in shame.

A few days ago, a young lady took to Facebook and complained bitterly about how an eight year old child, was ‘all over’ some ‘uncles’ thighs all the while wearing ‘only a pant’. She expressed disappointment at how ‘parents’ are no longer ‘raising their children right’ how this child is courting abuse, because a flat chested eight year old should be an object of desire. 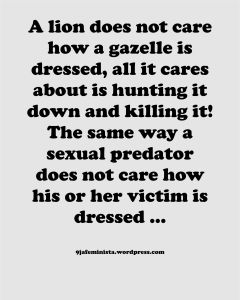 When called out on why she would choose to shame an innocent little girl, who was obviously enjoying the relief of not having to wear clothes in the hot afternoon sun, she claimed that the girl was making herself ‘vulnerable’ to abuse.

How in the world does a child go around making his/herself vulnerable to abuse?

Isn’t this the same line of argument proffered by rapists and would-be-rapists, ‘why was she wearing that gown?’, ‘what was she doing in his house?’

News flash – paedophiles(men or women who have sex with children), just like rapists and abusers, do not need provocation, they just are – in most cases – very sick individuals that need to be locked up or psychoanalysed or both.

Your child is at risk in your home, more than in the streets, and their state of dress or undress has absolutely nothing to do with this. Paedophiles are known to rape babies of 6months – can we say it’s because they are sagging their diapers?

Most people who abuse your children are often relatives or close family friends and even people who help out in the house. People in authority such as Imams, pastors and teachers, who have access to your child can also be sexual predators – (a sexual predator hunts down his/her potential victims the same way a frog hunts a fly). Abuse is about power and control.

A lion does not care how a gazelle is dressed, all it cares about is hunting it down and killing it! The same way a sexual predator does not care how his or her victim is dressed and is more concerned about assaulting the child or adult, sexually, expressing his/her power over the victim. 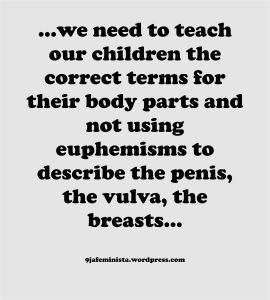 ren about respecting other people, their space, their choices, their lives!

We need to free ourselves from the mental shackles that have held us down for over a century.

A few years ago, women would be afraid to point at rapists and call them out, because of the taboos our society has placed on it, because we shame the victim instead of the abuser, but now, more and more women … and children, are coming out and making their voices heard, they have found out that the people who need to be shamed are the men and women telling them to keep quiet about their abuse, the ones that need locking away are the rapists.