Two weeks ago, in Ikoyi, Lagos, a bunch of schoolgirls sat for their finals and took to the streets in celebration. A bunch of boys from a school next door, (who had just finished their finals too) also took to the streets and started harassing these school girls  They tore their clothes, stole their phones and money, and then attempted to rape these girls, in broad daylight.
This week, in South-Africa, one girl was beaten to death and then burnt beyond recognition by her ex-boyfriend  Another was kidnapped and brutalized as she tried to escape from the car of her kidnapper.

In order to draw attention to the manner in which girls and women are being brutalized by the society, to examine the different ways that the entitlement mentality, with which men and boys are raised, contributes to the high rate of violence against women, and highlight the different ways that men can help mitigate other men’s terrible attitude towards women, the #menarescum/#menaretrash movement was trended on social media by gender activists and feminists from all over Africa.

It has become the norm on social media that whenever feminists or gender activists are advocating for the rights of the woman, men (and women) barge into the threads and try to trivialise the issues

(by personalising it), this usually descends into a troll-fest with the activists accused of misandry and warnings issued to non-feminist women to stay off the threads because they run the risk of not being seen as ‘good girls’ and ‘wife-materials’.

The #notallmen hashtag is an example of the defences raised by men to tackle what is perceived as an attack by feminists on the institute of ‘manhood’.

However, this latest hashtag has gotten more backlash from both men and women, even those previously seen as allies to the gender equality movement. The tag #menarescum/#menaretrash is seen as being unnecessarily harsh, demeaning and off-putting. Unlike previous times when the voices of feminists and gender activists gain a lot of traction during activism on social media, the voices of people protesting against the hashtag is louder and angrier.

Although gender activists pointed out that the hashtag is not directed at men in particular, but at the structures/systems that brought about inequalities and lately, spates of brutalization against women, a lot of people are not buying it.
According to @Mr Boro, a Twitter user: 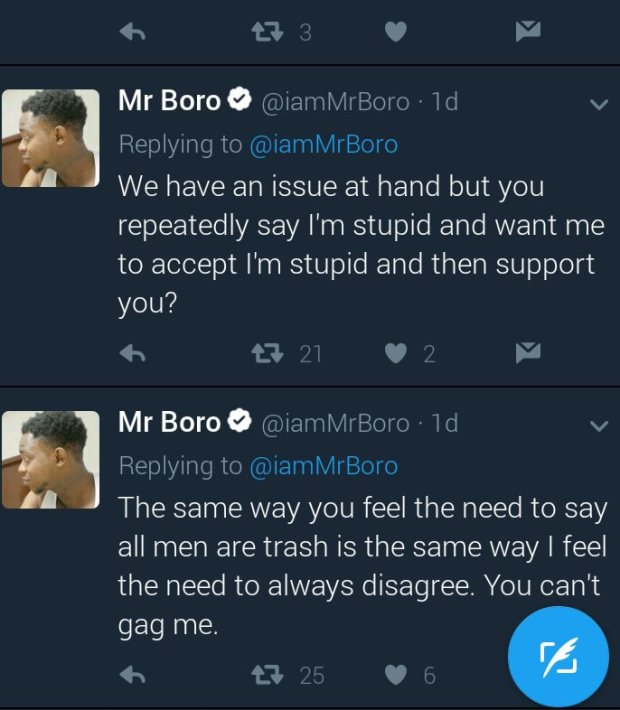 “You can advocate for women’s rights without putting men down. They are not mutually exclusive.”

“Shouting men are scum on Twitter won’t stop Titi, 28 in Iganmu from getting slapped by her husband tomorrow.”

A lot of activists disagree with Mr, Boro, because they believe that with more push women will come to know and recognize their rights and men will be forced to examine their sense of entitlement and privileges afforded them by the patriarchal system presently at work on the continent.

@ChineEzeks a well-known activist and advocate for gender equality;

“The hubris & ignirance to think you somehow escaped being conditioned by a patriarchal society and the privilege it affords you. Amazing.”

“You’re not trash, but you feel more displeasure about being called trash than about women experiencing displeasure from trash. Ok.”

Also calling out people about examining their reasons for being up-at-arms against the hashtag was @Aninoritse, gender and LGBTQ rights activist;

“Of course we know not all men are scum but no oo. Correct it.”

“And correct the scum among you. No o. You’re crying and claiming we are making noise.”

“This is why the narrative will never change. Men are scum/trash. Instead of you men to band together and weed out your scum.”

The narrative emerging from these engagements seems to be that advocates should not be so ‘hostile’ in highlighting the ways inequalities have put everyone at a disadvantage. That the engagements should be less confrontational/militant.

The question is, has the less militant activism worked? In all these years of gender rights activism in Africa what has really worked? Can the answer be gotten from our history? Particularly the activism carried out by women pre- and during colonialism. Were there other tools of engagement used by women before getting to the point of ‘sitting-on-a-man’(a tool used by Eastern women to correct power imbalances) and the topless protests  carried out by women in the Western part of Nigeria to protest injustices by government authorities.

On the other hand, post-independence, women advocates all over Africa have been lobbying their various governments for change in policies for over 30years, the advocacies are slowly, but surely, changing the landscape of women’s rights. Case in point the Violence Against Person’s bill which has been passed into law and the Child right’s act, which has gained traction in several states of the federation.

The way and manner through which feminists have engaged the issues of activism worldwide is vastly different, the end result has always been highlighting and correction of gender imbalances, can we then say that the #menarescum/#menaretrash movement has been able to achieve its aim?